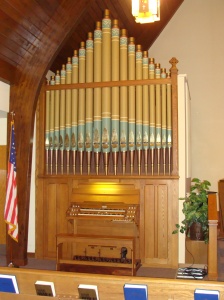 This sixteen rank tracker pipe organ was built by Alexander Mills of New York, New York, shipped by CB & Q railroad to St. Mark’s Episcopal Church, Cheyenne, Wyoming in 1888. In 1953 the organ was acquired by the Evangelical Covenant Church of Cheyenne. During 1988, the year of the organ’s 100th anniversary, it was acquired by the Evangelical Covenant Church of Aurora, Nebraska as a gift from the Midwest Covenant Conference. It was dismantled and moved from Cheyenne to Aurora where it was cleaned, refinished, repaired, restored and reassembled in its new home.

The work of moving and restoring was done by the J. F. Nordlie Organ Company of Souix Falls, South Dakota, with the assistance of volunteers from the Aurora church. The final tuning was done by David Beyer, tuner/tonal designer and concert organist for the Nordlie Company. The Nordlie Company specializes in restoration of old organs and builds new Tracker pipe organs.

The organ was first played for a Sunday morning worship service in the Aurora church on October 9, 1988 by Lorey Wadell, church organist.

Thus the organ began its second 100 years of service to God and His people with all its original beauty of sound and appearance. 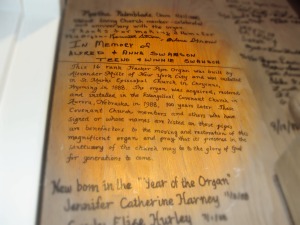 Rev. Strom, who was primarily responsible for keeping the organ available for preservation and continued service, compared the organ’s new life to what God does to human life. “He takes us from the junk heap and makes us new,” said Strom.

For additional organ information or to make an appointment to see or hear the organ, contact the church office at 402.694.6191.